Remembering three victims of COVID-19 and those they've left behind

Water bottles, clothing, Trump flags, even a U.S. flag littered the ground inside the U.S. Capitol after a mob backing President Donald Trump ransacked the building.

New Jersey Rep. Andy Kim walked amid the mess shortly after voting to certify Joe Biden’s victory over Trump — and felt the weight of the day wearing on him — when something motivated him to clean up the debris.

“I was just really affected emotionally. I felt this kind of heightened, kind of supercharged kind of patriotism that I just felt take over,” he said in an interview.

It was then he noticed police officers putting pizza boxes in trash bags, so he asked for one, too, and began cleaning up.

“When you see something you love that’s broken you want to fix it. I love the Capitol. I‘m honored to be there,” he said. “This building is extraordinary and the rotunda in particular is just awe-inspiring. How many countless generations have been inspired in that room?

"It really broke my heart and I just felt compelled to do something. … What else could I do?”

The image of Kim crouched down clearing away litter bookended a violent, historic day that saw an angry mob smash through police lines, break windows and wrench open doors as they sieged the building, not long after Trump said at a rally they should show “strength” and fight against Congress’ certification of Biden’s win. 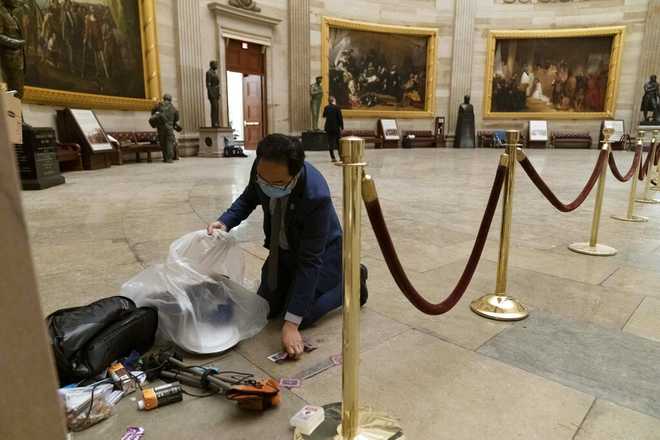 Andrew Harnik
Rep. Andy Kim, D-N.J., cleans up debris and personal belongings strewn across the floor of the Rotunda in the early morning hours of Thursday, Jan. 7, 2021, after protesters stormed the Capitol in Washington, on Wednesday.

Kim, a second-term Democrat from a district Trump won twice, wasn’t looking for publicity, according to one colleague who came upon him and didn’t recognize him at first.

“I think it was 1 in the morning,” said fellow New Jersey Democratic Rep. Tom Malinowski. “There were a couple National Guardsman and I noticed somebody on his hands and knees leaning under a bench to pick something up and it was Andy all by himself, just quietly removing debris and putting it in a plastic bag. He was clearly not doing it for an audience.

“It was for me the most poignant moment of the long night.”

Tom MacArthur, the former GOP representative from New Jersey that Kim beat in a close race in 2018, was heartened by his successor’s action. It was MacArthur who had helped shepherd the GOP effort to repeal the Affordable Care Act through the House and who stood alongside Trump and others at the White House to celebrate, though the effort failed. Kim ran in part on the popularity of Barack Obama’s signature health care law.

Kim represents the 3rd District, which stretches from the Philadelphia suburbs along the Delaware River in the west, across New Jersey’s pine barrens to seaside Ocean County.

He launched his campaign in 2017, returning to live in the southern New Jersey town he grew up in after a career in Washington and abroad.

Video: Nearly 6,200 National Guard are being mobilized to provide security to DC

A University of Chicago graduate and Rhodes Scholar, Kim served from 2013 until 2015 as the Iraq director for the Obama administration’s National Security Council.

Before that, he was the Iraq director at the Pentagon within the defense secretary’s office. He also previously served as a civilian adviser to generals David Petraeus and John Allen in Afghanistan.

The son of Korean immigrant parents, he became the first Asian American to represent New Jersey in Congress after he was elected in 2018.

On Thursday, he reflected on how he, a person of color, was cleaning up after people who waved white supremacist symbols like the Confederate flag during the melee. He said he hadn’t considered race at the time.

But he thought for a moment and added: “It’s so hard because we don’t look at each other and see each other as Americans first, whether it’s race or ethnicity or religion or political party that’s getting in the way of us being able to have that shared identity that forged our country and is necessary for us to be able to continue.”