A young husband with a child on the way. Another man who always wanted to be in the military. A man who planned to become a sheriff's deputy when his deployment ended.

Heartwrenching details began emerging Friday about some of the 13 U.S. troops killed in a horrific suicide bombing at Afghanistan's Kabul airport, which also claimed the lives of more than 100 Afghans.

Eleven Marines, one Navy sailor and one Army soldier were among the dead, while 18 other U.S. service members were wounded in Thursday's bombing, which was blamed on Afghanistan's offshoot of the Islamic State group. The U.S. said it was the most lethal day for American forces in Afghanistan since 2011. The White House said President Joe Biden will look for opportunities to honor the service members who lost their lives, many of whom were men in their early 20s.

On Saturday, the U.S. Department of Defense released the names of the service members who lost their lives Thursday. Here are some details about the victims:

Rylee McCollum, a Marine and native of Bondurant, Wyoming, was married and his wife is expecting a baby in three weeks, his sister, Cheyenne McCollum, said.

"He was so excited to be a dad, and he was going to be a great dad," McColllum said. She said her brother "was a Marine before he knew he was allowed to be a Marine ... He'd carry around his toy rifle and wear his sister's pink princess snow boots and he'd either be hunting or he was a Marine. Sometimes it would be with nothing on underneath, just a T-shirt." 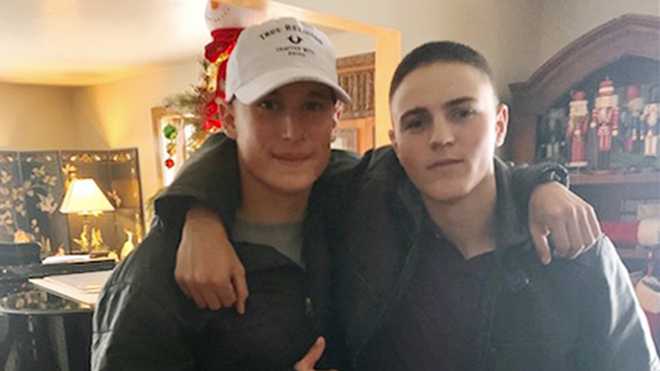 Regi Stone via AP
This Dec. 2019, photo provided by Regi Stone shows Eli Stone, left, and Rylee McCollum, at Christmas in Stone’s house in Jackson, Wyo. Rylee McCollum, of Bondurant, Wyo., was one of the U.S. Marines killed in the suicide bombing at the Kabul airport, in Afghanistan, according to his sister, Roice McCollum.

McColllum said her brother wanted to be a history teacher and a wrestling coach once he completed his service. Another sister, Roice McColllum, told the Casper Star Tribune that her brother was on his first deployment when the evacuation in Afghanistan began.

Regi Stone, the father of one of Rylee McCollum's friends, described McCollum as "a good kid," who was resilient, smart and courageous. Stone shared a note that his wife, Kim, sent to their son Eli Stone, who is also in the military and deployed elsewhere. In the note, Kim wrote that she remembered telling the friends to run the other way if they had to go in first and that both of them said, "If we die doing this, we die doing what we love."

Marine Lance Corporal Jared Schmitz grew up in the St. Louis area and was among a group of Marines sent back to Afghanistan to assist with evacuation efforts, his father, Mark Schmitz, told KMOX Radio.

Mark Schmitz said his son always wanted to be a Marine. He said he learned of his son's death when the Marines came to his home in Wentzville, Missouri, at 2:40 a.m. Friday.

"This was something he always wanted to do, and I never seen a young man train as hard as he did to be the best soldier he could be," Schmitz said of his son. "His life meant so much more. I'm so incredibly devastated that I won't be able to see the man that he was very quickly growing into becoming."

Staff Sgt. Taylor Hoover, of Utah, had been in the Marines for 11 years and was remembered as a hero who died serving others, his father Darin Hoover said.

Darin Hoover found out his son had died in the blast on Thursday night when Marine staff sergeants who came to his house in a suburb of Salt Lake City.

"He is a hero. He gave his life protecting those that can't protect themselves, doing what he loved serving his country," Darin Hoover said.

He said he heard from Marines throughout the day Friday who served with his son who said they are grateful they had him as their sergeant.

"They look back on him and say that they've learned so much from him," Darin Hoover said. "One heck of a leader."

His father said his son was also a best friend to his two sisters and loved all his extended family. He had a girlfriend in California.

A high school football player who graduated from Hillcrest High School in Midvale, Utah, in 2008, Taylor Hoover was the kind of guy who "lit up a room" when he came in.

"He was the most-loving, giving, understanding person you could ever meet," Darin Hoover said.

Utah Gov. Spencer Cox was among officials who offered their sympathies to Hoover's family. He said flags will be flown at half-staff at all state facilities and public grounds until Aug. 30 to honor all those killed in Afghanistan. "We honor his tremendous bravery and commitment to his country, even as we condemn the senseless violence that resulted in his death," Cox said.

Corporal Daegan William-Tyeler Page served in the 2nd Battalion, 1st Marine Regiment based at Camp Pendleton, California, and planned to go to trade school and possibly become a lineman after his enlistment ended, his family said in a statement.

Page was raised in Red Oak, Iowa, and in the Omaha metro area and joined the Marines after graduating from Millard South High School. He is mourned by his girlfriend, parents, stepmom and stepdad, four siblings and grandparents, the family said in a statement released by a family friend. The statement said the family did not wish to speak to the media at this time.

"Daegan will always be remembered for his tough outer shell and giant heart," the statement said. "Our hearts are broken, but we are thankful for the friends and family who are surrounding us during this time. Our thoughts and prayers are also with the other Marine and Navy families whose loved ones died alongside Daegan."

U.S. Rep. Don Bacon, a Republican from Nebraska, said in a statement that he was heartbroken to learn of Page's death. "Corporal Page is an American hero who gave the last full measure of devotion. He served his country honorably, and his service will never be in vain."

Ryan Knauss was remembered as a motivated man who loved his country and was looking forward to coming back to the U.S. and eventually moving to Washington, D.C., family members told WATE-TV in Knoxville, Tennessee.

Knauss' grandfather, Wayne Knauss, told the television station that the family received word of Knauss's death on Friday, and funeral services were being planned. Knauss said his grandson attended Gibbs High School and grew up in a Christian home.

"A motivated young man who loved his country," Wayne Knauss said. "He was a believer, so we will see him again in God's heaven."

Stepmother Linnae Knauss said Ryan planned to move to Washington, D.C., after he returned to the U.S.

"He was a super-smart hilarious young man," she said.

Hunter Lopez, whose parents work at the Riverside County Sheriff's Department in Southern California, was a sheriff's Explorer for three years before joining the Marine Corps in September 2017, said Sheriff Chad Bianco.

Bianco said Lopez planned to follow in his parents' footsteps and become a Riverside County Sheriff's Deputy after his deployment.

Related Story
'We will hunt you down': President Biden vows to finish Kabul evacuation, avenge US deaths

The Southern California city of Norco confirmed the death of Lance Corporal Kareem Mae'Lee Grant Nikoui. The city said Friday in a post on social media that Nikoui is survived by his parents and siblings, and his name will be enshrined on a memorial wall in the city.

"He was a good kid, very quiet," said Bash, adding that "his goal in life was to be in the service."

The Norco High School Air Force JROTC posted on Facebook that Nikoui was "one of our best Air Force JROTC cadets" and that "Kareem was set on being a Marine & always wanted to serve his country."

The death of Lance Corporal David Lee Espinoza, a Marine from Laredo, Texas, was confirmed by U.S. Rep. Henry Cuellar.

In a statement, Cuellar said Espinoza "embodied the values of America: grit, dedication, service, and valor. When he joined the military after high school, he did so with the intention of protecting our nation and demonstrating his selfless acts of service."

A Navy hospital corpsman from Ohio was among those killed in a suicide attack at the Kabul airport Thursday.

Max Soviak was a 2017 graduate from Edison High School in northeast Ohio.

He was often deployed alongside Marines.

"One Sailor was killed during the August 26 attack at the Abbey gate of Hamid Karzai International Airport in Kabul. We mourn the loss of this Sailor and we offer our deepest condolences to the loved ones of our fallen shipmate," a statement from the U.S. Navy said.

According to Boston sister station WCVB, sources have identified the Marine as Johanny Rosario, 25. She was from Massachusetts and a former Lawrence High School student.

In May, Sgt. Rosario was honored by her unit, the Naval Amphibious Force, Task Force 51/5th Marine Expeditionary Brigade.

The same unit has posted several photos in recent days of members assisting in the evacuation at Hamid Karzai International Airport.

Just days before her death, Gee posted a photo on Instagram of herself in uniform holding a baby in Kabul with the caption, "I love my job."

According to Stars and Stripes, Gee served as a maintenance technician with the 24th Marine Expeditionary Unit.

"I ask all Hoosiers so inclined to send prayers to the family of one of America's finest, U.S. Marine, Corporal Humberto Sanchez," Indiana Gov. Eric Holcomb said in a statement. "Few among us answer a call of duty so dangerous as Corporal Sanchez volunteered to do. In doing so, he made the ultimate sacrifice so others could live and find freedom."

California Gov. Gavin Newsom released this statement in regards to Merola and the other victims from California.

"California joins the nation in mourning the tragic loss of 13 U.S. service members, including those from California, and many other innocent victims in this heinous attack," Newsom said. "Our heroic troops gave their lives to protect others amid harrowing and dangerous conditions, and we will never forget their bravery and selfless sacrifice in service to our nation."