Lady Gaga was thrilled that Tony Bennett recognized her during the pair’s final performance together at Radio City Music Hall in August, according to a 60 Minutes interview.

The 95-year-old singer has been battling Alzheimer’s disease since 2016. Both Bennett’s family and Lady Gaga shared details of his battle with the debilitating disease during a CBS special, which aired over the weekend. The special included one-on-one interviews and clips from Bennett’s final performance.

Lady Gaga revealed that during the first few weeks the two had spent time together since the COVID-19 pandemic began, Bennett referred to her as "sweetheart" and she was unsure if he knew who she was. But when she walked onstage during their final show together, it was heartwarming to see he recognized the singer.

When Gaga walked onstage, she greeted him with, "Hey, Tony." As the crowd cheered, Bennett exclaimed, "Whoa, Lady Gaga!" She appeared incredibly delighted by his response, bending over in laughter before twirling around onstage in her golden dress. After which he added, "I like that! Do it again!" Gaga continued to twirl before approaching Bennett for their duet.

"That’s the first time that Tony said my name in a long time," she said during the interview. 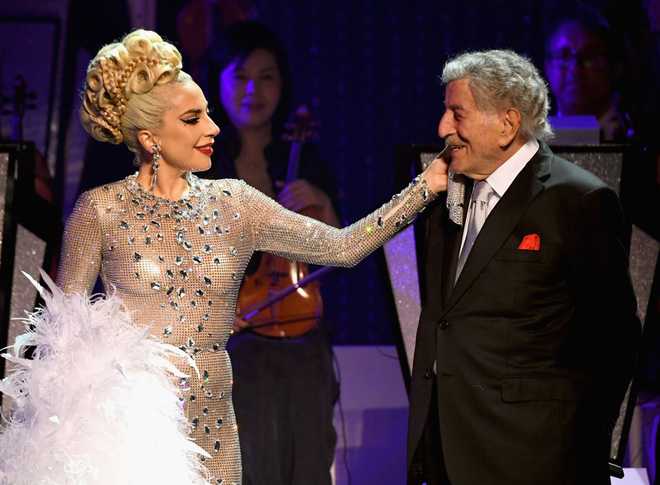 Unfortunately, memory loss is one of the key aspects of dementia, and Alzheimer's is the most common cause of dementia and affects an estimated 60 to 80% of all people with dementia. Alzheimer’s, which is believed to be caused by plaques and tangles that form in the brain, destroying both the brain cells and the connections between them, can start developing years before any symptoms appear. Most people with Alzheimer’s start experiencing symptoms in their 60s, 70s, or even later, but in about 5% of cases, symptoms may start appearing at a younger age.

Despite his diagnosis, Bennett continued to perform and sing — and remembered Gaga for his final show. "I had to keep it together, because we had a sold-out show and I have a job to do. But I’ll tell you, when I walked on that stage and he said, 'It's Lady Gaga,' my friend saw me. And it was very special," she said.

Bennett doesn't let his disease get in the way of performing and making music that everyone loves. "When that music comes on, something happens to him. He knows exactly what he's doing. And what's important for me, actually, is just to make sure that I don’t get in the way of that," Lady Gaga said.

The two have a strong relationship and first collaborated on Bennett’s album Duets II and then on their co-album in 2014, Cheek to Cheek. They recently joined forces on what will be Bennett’s last album, Love for Sale, according to People.

Bennett's wife, Susan Benedetto, also opened up about her husband’s Alzheimer’s battle during the special.

"He recognizes me, thank goodness, his children, you know, we are blessed in a lot of ways," she said. "He’s very sweet. He doesn’t know he has it."

Backstage during the Radio City event, Benedetto was seen watching Lady Gaga’s set with Bennett, reminding him that he was going out to perform that evening as well. But as soon as the curtain rose to reveal Bennett onstage, he seemed just like his old self again.

'Once he saw the audience and, you know, and he raises his hands, I knew we were alright," Benedetto said. "Because he became himself. He just turned on. It was like a light switch."

To close out the night, Lady Gaga asked Bennett if she could have the honor of escorting him offstage for his final show. "Just simply being the woman that got to walk him offstage, that’s enough for me," she said in the interview.

Viewers then watched as Lady Gaga, fighting through tears, told Bennet he was "so amazing" and "spectacular" during his final performance.