Video above: US hiring surges in July, unemployment rate drops

The jobs that major chains in the United States are having the most trouble filling right now aren't inside their stores ringing up customers and stocking shelves. They're at their warehouses selecting items, packing boxes and loading trucks.

Amazon, Walmart, Dollar Tree and other retailers are dangling wage hikes, signing bonuses and improved tuition reimbursement packages to meet the staffing crunch at their warehouses.

Competition for warehouse workers was already stiff before the pandemic. Stores were adding jobs at their warehouses and logistics networks as more customers ordered online. But the pandemic supercharged online shopping, adding even more pressure on retailers to staff up at warehouses. Now, retailers are scrambling to add extra warehouse staff as they ramp up for the peak holiday season amid a record number of unfilled jobs.

Fifty-two percent of retailers said they were having "significant challenges" hiring warehouse employees, according to a survey of more than 80 big box, grocery, drug store and apparel chains conducted on Aug. 4 by executive search firm Korn Ferry. Thirty-three percent of retailers surveyed said they were having such challenges hiring employees to staff stores.

Warehouse roles such as forklift and equipment operators, truck loaders and shipping and receiving clerks are typically more physically demanding than traditional store jobs such as cashiers. Unlike most stores, warehouses run around the clock, so companies must find workers willing to work late shifts or overnight.

Warehouses are often located on the outskirts of cities or in rural ares, making the pool of available workers to hire from smaller than stores in city centers and the commute time less attractive to potential prospects.

"Distribution centers tend to be clustered outside of major metropolitan areas, so there's fewer people to hire," said Rowley.

'Very competitive out there'

Peak holiday season has already started for retailers' warehouses, and chains have been rushing to staff up. This is because retailers are loading up on inventory now at their warehouses in preparation to ship to stores and customers' homes in time for holiday shopping, said Matthew Hertz, co-founder of e-commerce consultancy firm Second Marathon.

"Inventory that will be sold online and in brick and mortar for the holidays is now being offloaded from containers at the ports, trucked to warehouses and [prepared for] shipment," Hertz said.

Increasing the need for extra workers, companies are trying to bring in more products than they need — known as "just in case" inventory planning — to ensure that there are no hiccups during the holidays, he said.

Retailers have been offering cash bonuses as incentives to fill a number of positions in stores and warehouses in recent months. The latest round is targeting warehouse and other logistics positions. 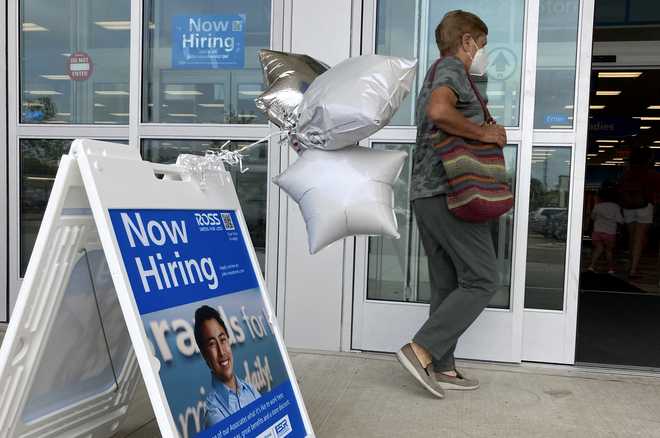 Nam Y. Huh
A shopper passes a hiring sign while entering a retail store in Morton Grove, Ill., Wednesday, July 21, 2021. Despite an uptick in COVID-19 cases and a shortage of available workers, the U.S. economy enjoyed a burst of job growth last month as it bounces back with surprising vigor from last year’s coronavirus shutdown. (AP Photo/Nam Y. Huh)

Walmart has started offering warehouse workers bi-weekly pay raises of several dollars an hour through January. Some workers have also been offered up to $1,000 retention bonuses over four weeks for not missing any shifts in July and August. The moves were first reported by the Wall Street Journal.

"It is very competitive out there right now. This very much helps with retention and helps with hiring," Scott Pope, a Walmart spokesperson, said.

Walmart is preparing for the holiday shopping season by bringing in extra inventory and wants to have all of its workforce in place heading into the holiday rush, said Pope.

Amazon announced in May that it was hiring 75,000 workers across its logistics network and bumping up starting pay to an average of $17 an hour, above its $15 minimum rate. The company is also offering sign-on bonuses of up to $1,000.

"We're spending a lot of money on signing and incentives," said Brian Olsavsky, Amazon's chief financial officer, last month. "It's a very competitive labor market out there. And certainly, the biggest contributor to inflationary pressures that we're seeing in the business."

Ahold Delhaize, the parent of Stop & Shop, Giant and Food Lion grocery stores, has increased hourly wages by between $2 and $4.50 for distribution center workers — up to a 30% increase depending on the market. The company also changed its college tuition reimbursement program for warehouse workers taking classes on the side to make reimbursement effective immediately once a worker is hired. Previously, workers had to wait to be reimbursed for tuition, and Ahold hopes the change will help attract talent heading into the fall semester.

Adrienne Heil, head of supply chain HR at Ahold, said that warehouse roles for the grocer are "tough jobs to staff" because they are physical jobs, the work is often done in cold temperatures handling fresh and frozen items, and there are overnight shifts to fill, unlike stores.

"Those are some of the additional challenges that we have in a distribution center environment versus a store environment," she said.