After failed searches by family and law enforcement, it was Pocket, a search-and-rescue terrier, that located Geneva Logston last week.

In less than two hours, Pocket was able to successfully track Logston's scent and locate her in the woods behind her family's home in Bullitt County, Kentucky. It happened Friday afternoon, about 48 hours after Logston became lost.

The pair reunited Friday and for Logston it proved emotional.

"You are an amazing animal," she told the dog, adding, "Pocket didn't stop, didn't give up. Pocket saved my life." 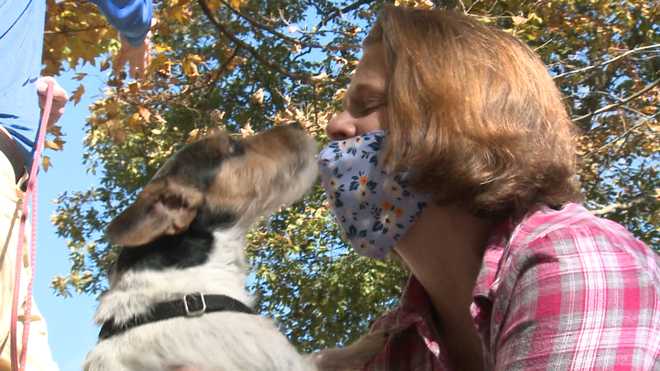 Logston had gone for a walk last Wednesday, bringing with her only a bottle of water. Soon realizing she had gone too far, she became panicked and slipped and was knocked unconscious trying to make it out of the woods.

"I wasn't familiar with anything. I just couldn't think how to get home," Logston said.

Because she had left her cellphone and purse behind, family knew she had not gone far. Almost immediately they began searching the woods behind the home. Law enforcement joined the search Wednesday night, but with no luck.

Friday marked day two in the woods. The water was gone and so too was all hope. And then, Logston spotted Pocket.

Disoriented, she believed handler Jennifer Hall with KYK9 was just a woman walking her dog, despite the treacherous, steep terrain.

"Never did I dream Pocket was looking for me, to bring me home," Logston said.

"I just said, 'Are you Geneva?' And she said 'yes' and Pocket, I remember, was pulling me in really hard," Hall said.

She shouted to her team Logston had been found, but that's all the information that was relayed to her family.

"I think some of the family didn't hear she's alive. They heard that they found her and they were like, 'Is she alive?' 'Is she dead?' It was very emotional. She saved Geneva's life," Hall said.

And that is something Logston said Friday she simply did not have the words for.

"Thank you, Pocket. Thank you," she was heard telling the dog, while rubbing her fur.

Logston was taken to University Hospital and treated for what she described as minor injuries.