By Ray Sanchez and Hira Humayun

No injuries were reported when a Union Pacific train derailed and caught fire on a bridge over Tempe Town Lake in Arizona, officials said Wednesday.

Plumes of smoke could be seen rising into the morning sky beneath a trail of flames on video and images from the site of the derailment, where part of the bridge collapsed.

The train was hauling unknown hazardous material, according to the Tempe Fire Department.

Tempe Police Department Police Chief Sylvia Moir urged residents via Twitter to stay away from the scene, which she described as very dangerous.

"There's fire pouring into the lake from the middle of the bridge," Camille Kimball, who was riding her bike under the structure, told KTVK/KPHO. "It looks like a scene from hell, truly."

Fire department spokesman Brandon Siebert said officials were "erring on the side of caution" and keeping firefighters and bystanders "as far away as possible" until they know more about the hazardous material on the train. 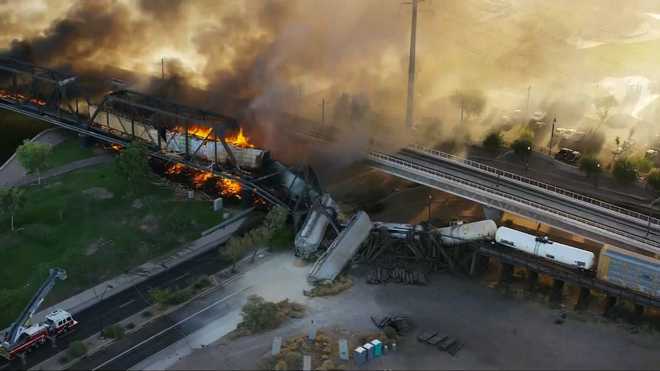 The operator is safe and assisting hazmat technicians in determining what was on the train, according to Siebert.

The cause of the derailment is unknown, KNXV reported.

"It is possible the derailment led to the partial bridge collapse but don't know that for sure at this time," Siebert said.

Nearly 100 firefighters from Phoenix, Tempe, Chandler, Mesa and Scottsdale responded to the scene, according to Siebert.