Photographer Paul Smith took the photo from Missouri when he was looking toward the storms east of Fort Smith, Arkansas.

He saw an electrical phenomenon develop directly above the thunderstorm.

These things happen all over the world, and it is real, even though it looks like something alien. But what is it?

Well, they're usually called "red sprites." They occur above thunderstorms. They're only seen at night from great distances. That's why the photographer in Missouri was able to see them all the way in Arkansas.

Researchers think they're electrical discharges. They're not directly connected with a thunderstorm but usually occur simultaneously with other lightning strikes within the thunderstorm. 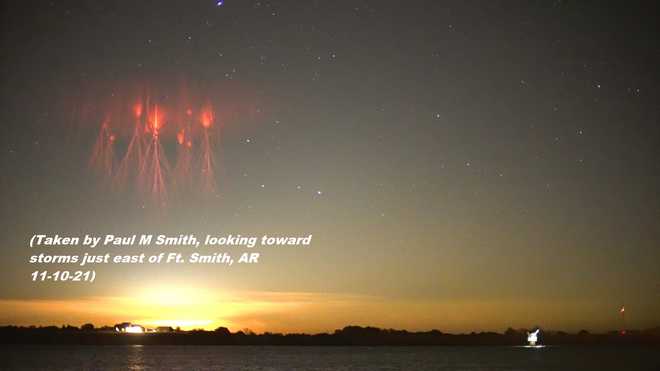 More research is needed, and it's uncertain how frequently the red sprites occur. They happen fast, and that's why a lot of people have never seen them. They last only one-tenth of a second, just the blink of an eye.