More than 62 million people are under winter weather advisories across the Midwest and Northeast on Saturday ahead of a storm system bringing freezing rain over the weekend.

Several Midwest states, including Illinois, Iowa, Missouri, Indiana and Michigan, are expected to experience either ice or rain. The Northeast states included in the advisory, New York, Pennsylvania, Vermont, Massachusetts, New Jersey and Connecticut, will also experience ice or rain, except for the Green and White mountains where some snow will mix in, as well as right along Lakes Erie and Ontario where lake effect snow will also be present.

The forecast of mixed precipitation comes on the heels of a winter storm that hit the mid-Atlantic and Northeast, dropping more than a foot in some spots.

According to the National Weather Service, snow accumulations "greater than a foot" are possible downwind of the Great Lakes, along with wind gusts as high as 35 mph, producing blowing and drifting snow.

"Travel could be very difficult with deep snow cover on roads and very poor visibility. The hazardous conditions could impact the morning or evening commute on Monday," the advisory states.

Chicago, St. Louis, Baltimore and Philadelphia are included in these advisories. Freezing rain was forecast to develop across Missouri and northern Arkansas through the morning hours of Saturday before shifting into Illinois and the Ohio River Valley through the afternoon and evening. A glaze to a tenth of an inch of ice accumulation is possible across these regions.

"Even a glaze of freezing rain can become dangerous on untreated surfaces," according to the Weather Prediction Center. 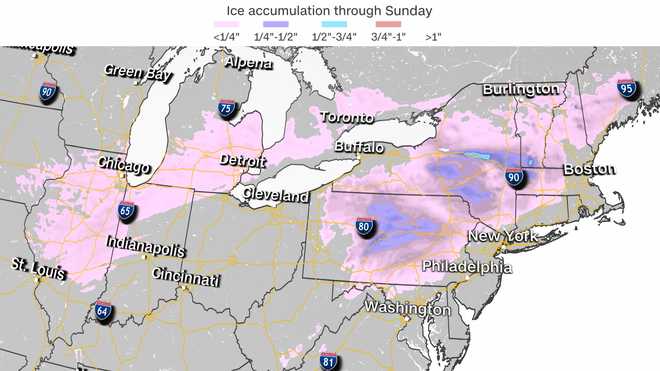 CNN Weather
Several Midwest states, including Illinois, Iowa, Missouri, Indiana and Michigan, are expected to experience either ice or rain.

The National Weather Service in Chicago warned Saturday evening many sidewalks and parking lots in the city were iced over, "and it may not be very apparent." In Indiana, State Police Sgt. Glen Fifield wrote on Twitter Saturday drivers should slow down, adding troopers were investigating multiple crashes.

"Cars are reportedly crashing like 'ping-pong balls' at crash scenes. Once one vehicle crashes, it's resulting in secondary crashes at the same location," Fifield said. "Please reconsider your necessity for travel this evening in #NWI as the roads are extremely slick. Especially bridges and overpasses."

By Saturday overnight into Sunday morning, this swath of freezing rain is expected to shift into the Northeast. Slightly higher ice accumulations are expected during the overnight hours when temperatures are expected to remain below freezing. Most locations could see a tenth to a quarter of an inch of ice.

"The cold conditions leading up to this event may make it a dangerous situation for anyone traveling during this time," according to the National Weather Service office in Baltimore.