Remembering three victims of COVID-19 and those they've left behind

Video above from May: North Dakota governor makes emotional plea to avoid divide over face masks

Asymptomatic healthcare workers who have tested positive for COVID-19 in North Dakota have been given the OK to continue working and treating coronavirus patients.

North Dakota Gov. Doug Burgum said Monday that health care workers who have tested positive for COVID-19 but do not have symptoms should be allowed to stay on the job, and the state's interim health officer allowed it.

The governor said the Centers for Disease Control and Prevention has been allowing infected workers without symptoms to keep working as long as they take precautionary measures.

The state is also looking to increase rapid testing of healthcare workers to "keep them in the game," the governor said.

The governor said leaders from the six major hospitals in the state will meet daily to discuss hospital space and staffing, with the likelihood of shifting nurses and other medical personnel even "among competitors if necessary." Some hospitals will also be suspending some elective surgeries, he said. 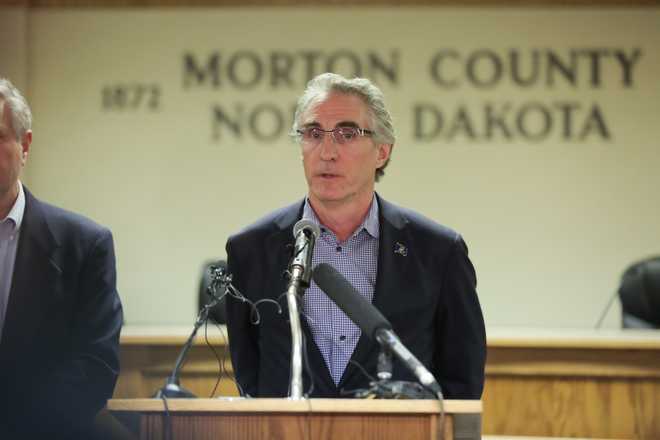 Burgum also announced that every county in the state has been declared at high risk, which means that businesses will be limited to 25% capacity with a cap of 50 people and no standing room allowed. He added that masks "should be required."

The edict comes on a day when 14 more patients were hospitalized due to COVID-19 to increase the record number of people being treated in medical facilities to 254.

Burgum said that while that while people may disagree on the effects of the virus, "the one thing that is not debatable is that our hospitals are under enormous pressure."

North Dakota has reported one of every 83 residents has tested positive for the coronavirus in the past week.

The state had 2,265 new cases per 100,000 people in the past two weeks, which ranks first in the nation for new cases per capita.

State health officials reported 1,039 new coronavirus cases on Wednesday, and a daily positivity rate of more than 18% for the second consecutive day.

There were 12 more deaths, increasing the total to 696. There have already been 123 deaths in November, matching all of September. October was the deadliest month so far in North Dakota, with 292 deaths.

North Dakota has the ninth highest per capita death count, with 88.7 deaths per 100,000 people.

For most people, the coronavirus causes mild or moderate symptoms, such as fever and cough that clear up in two to three weeks. For some, especially older adults and people with existing health problems, it can cause more severe illness, including pneumonia and death.