Musselman's late father, Bill, coached at Minnesota in the early 1970s and made stops at the highest and lowest levels of pro basketball. Drew's father, Homer, was coach at Valparaiso for 22 years and went to the NCAA Tournament seven times.

Eric Musselman coached pro ball for nearly a quarter-century before he entered the college game nine years ago. Drew, who worked for his father at Valpo, took over then-scandal-plagued Baylor 18 years ago and turned it into a Big 12 power.

The 56-year-old Musselman said there never was a question he would get into coaching.

"My father was my idol, my best friend," he said. "For Halloween, I wanted to be a coach. After school, when I was in grade school, my mom would drop me off at my dad's practices, and I'd stay until 10:00 or 11:00 at night until he'd finish breaking down film or having staff meetings. I just wanted to walk in his footsteps."

The next generation of coaching Musselmans is being developed. Michael Musselman is in his second season as Arkansas' director of recruiting. That followed his one year as a graduate assistant for his dad at Nevada.

"I have a younger son in college," Eric said, "and I know he wants to get into coaching when he graduates from the University of San Diego."

Musselman said a lot of coaches' sons avoid the business because they understand how stressful a life it can be.

"It's a conversation that my mother and I had several, several times when I decided to get into coaching, just how difficult it is," he said. "Coaches get fired, and it affects family. But it's what I loved. But I was warned by my mom, I promise you that."

The coaching bug also bit Scott Drew's brother. Bryce Drew, 46, is in his first year at Grand Canyon after head coaching stints at Vanderbilt and Valpo.

"We have a great mentor," Scott said of their dad. "There's a reason he's in the Hall of Fame. Both of us were blessed to learn from him. As good a coach as he is, he's a better father."

Spokane, Washington, already was going to get plenty of attention in this tournament thanks to No. 1 overall seed Gonzaga.

Surprising Elite Eight team Oregon State also has a strong connection to the Lilac City. The 12th-seeded Beavers will face No. 2 seed Houston on Monday in the Midwest Region final, while Gonzaga will play in the West Region final on Tuesday. 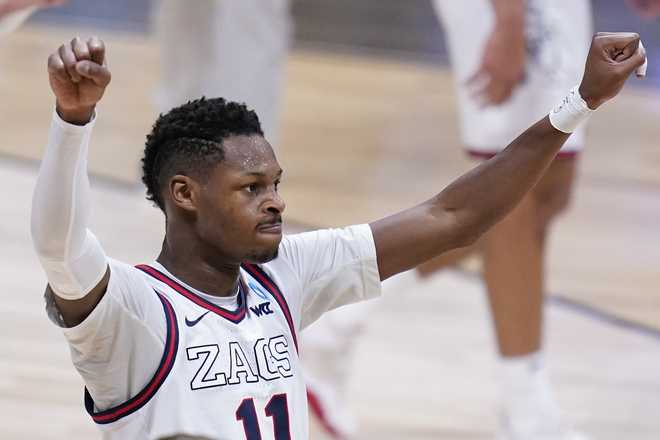 Michael Conroy / AP Photo
Gonzaga guard Joel Ayayi (11) reacts to a play against Creighton in the first half of a Sweet 16 game in the NCAA men’s college basketball tournament at Hinkle Fieldhouse in Indianapolis, Sunday, March 28, 2021.

Oregon State coach Wayne Tinkle reminisced Sunday about growing up in Spokane in the 1980s when the city's basketball scene began taking off. That's when John Stockton starred at Gonzaga before his Hall of Fame career with the Utah Jazz.

Tinkle starred at Ferris High School in the early 1980s before playing at Montana. Tinkle's daughter, Elle, played at Gonzaga.

Tinkle said he shared a birthday text with Stockton recently and had a chat with Gonzaga coach Mark Few when they ran into each other at Victory Field in Indianapolis.

"There's a lot of good athletes that come out of Spokane, not just basketball," Tinkle said. "But it does make me proud that I once had a hand and part of the history there as far as basketball goes."

There might not be any Indiana teams left in the tournament. There still are some Hoosiers.

Rupp spent two seasons on the staff of Mike Davis, who was Bob Knight's successor in 2000. Sampson replaced Davis in 2006. Smith was recruited by Tom Crean, who replaced Sampson in 2008, and played for the recently fired Archie Miller.

And if UCLA wins, assistant coach Michael Lewis would join the list. He was a captain on Knight's final Indiana team in 1999-2000 and graduated as the Hoosiers' career assists leader with 545. Lewis is now second all-time behind Kevin "Yogi" Ferrell (633).