"Jeopardy!" champion Amy Schneider is adding to her list of bragging rights and admirers.

Already the highest-earning female contestant in the quiz show's history and the woman with the longest winning streak, on Friday she became one of only four "Jeopardy!" players to reach seven figures in regular-season winnings.

Poised and affable on TV and in an interview with The Associated Press, she doesn't seem the gloating type. But she is tickled by the fact that she's fulfilled a prediction made by her 8th-grade classmates in Dayton, Ohio: She was voted most likely to be a "Jeopardy!" contestant, based on her geography and spelling bee prowess.

More significantly, she's the first transgender person to qualify for the show's tournament of champions. In a series of tweets last November, Schneider said she's proud to be a trans woman and wants people to know that aspect of her, adding, "but I'm a lot of other things, too!"

Schneider's "Jeopardy!" achievements have made her both an inspiration and a target for transphobic insults online — which she batted away with the same aplomb she displays on TV. Her deftness earned attention last week from Harvey Fierstein.

"I couldn't be prouder if she were my own daughter," the writer and Broadway star tweeted.

Fun fact: Schneider is proud of a podcast she did on "Downton Abbey" and invites those who are interested to listen to "hundreds of hours of content" about the PBS series. 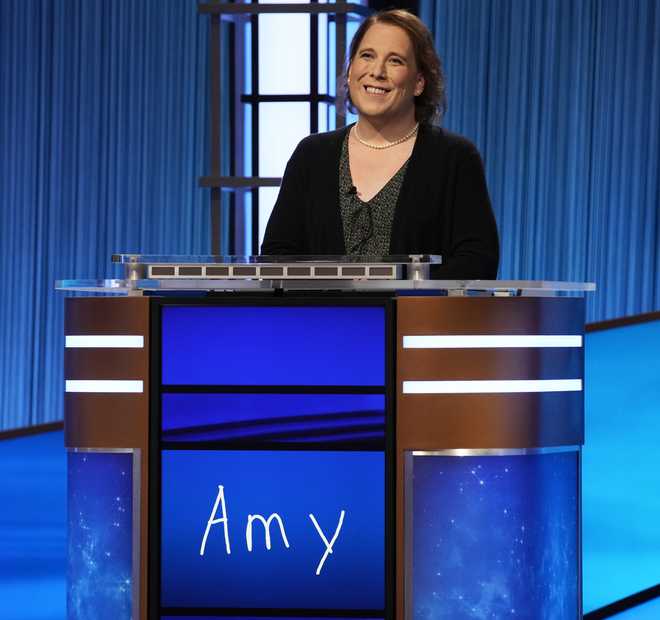 Schneider, an engineering manager living in Oakland, California, recently talked with AP about her newfound fame, keeping her day job — but dreaming about an entertainment career — and being a voice for the trans community. Remarks have been edited for clarity and length.

AP: Are you having pinch-me moments over how well you've done on 'Jeopardy!'?

SCHNEIDER: Absolutely. Just seeing myself on TV still is almost a shock, even though I was there when it all happened. I thought I could win some games but I didn't think I would do this well. The other day, my girlfriend mentioned some famous people that had gone to her high school, and I was thinking, "I know there was somebody who went to mine." I looked it up on Wikipedia and there I was, listed under notable alumni. That was a very weird moment to see that.

AP: You've mentioned actor Laverne Cox and comedian Natasha Muse as trans women you find inspiring. Have you heard from viewers who see you as a role model?

SCHNEIDER: I have definitely heard from other trans people who have been sort of thrilled to see me out there. But one of the things that I've enjoyed the most is hearing from parents, and sometimes grandparents, of trans people, an older generation. There's a lot of fear for their loved ones who are trans, and worry that they might be limited in life. To be able to go out there and show that I can be successful in a very mainstream type of way has, I think, made a lot of them feel better about the people in their lives.

AP: Given that Cox and Muse are both performers, is that something that touches a chord in you? You've done acting, and is comedy something you're interested in?

SCHNEIDER: I've done open mics around town, just for fun and not seriously pursued it, but I've been a performer my whole life. As I was struggling with the necessity of coming out, definitely one of the fears was, 'Will I still be comfortable in public and will I still be able to perform after I transitioned?' And seeing them definitely helped with that.

Getting on 'Jeopardy!' has never been more straightforward. Here's how to do it

AP: Is a career in entertainment your goal?

SCHNEIDER: I'm dreaming of it. I don't know exactly in what direction I would want to take that, and I don't know what opportunities will be available coming out of this (the show). But I've been working on my writing as a field I might find some opportunities in. Beyond that, I'm just sort of riding it out and kind of seeing what may or may not come up as it goes along.

AP: Last month, after you got a Twitter shoutout on your "Jeopardy!" success from Democratic Rep. Tim Ryan of Ohio, you asked your followers in the state to consider that a vote for a Republican in this year's elections would make your life harder. How did you decide to make a statement that puts you on a different level of exposure?

SCHNEIDER: I definitely thought about it, and I don't want my social media to be a place where people are arguing about politics all the time. But at the same time, I can't ignore the fact that there's people out there threatening my brothers and sisters in the trans community. Here I have a chance to say something about it, and I can't be completely silent. I don't necessarily want to be super-activist about it and constantly banging that drum. But I can't be silent either, when I know that there's so many people in danger of real hurt and harm from political policies.

AP: You had a polite response to someone who took you to task for the tweet.

SCHNEIDER: I grew up in a Republican household and a Catholic environment, and many people I love are conservative in various ways. I know them, and I know they're not intentionally out there doing harm and that they have reasons for the positions that they hold. So I want to engage people from (across) the spectrum where that's possible. But it has to be in a condition where my right to exist is granted, otherwise we can't talk.