The discovery of planets outside our solar system, called exoplanets, has revealed strange worlds never imagined in our corner of the universe.

Now, astronomers have found an ultra-hot gas giant exoplanet where droplets of iron rain from the sky at night.

The exoplanet is known as WASP-76b and it was found orbiting a star in the Pisces constellation 640 light-years away from Earth. It's blasted by thousands of times the radiation that Earth receives from the sun.

"One could say that this planet gets rainy in the evening, except it rains iron," said David Ehrenreich, study author and professor at the University of Geneva in Switzerland. The study published Wednesday in the journal Nature Astronomy.

The planet is tidally locked, meaning the same side of the planet always faces the star. This is similar to how our moon orbits Earth. On the so-called dayside of the planet facing the star, temperatures exceed 3,140 degrees Fahrenheit.

Astronomers used the European Southern Observatory's Very Large Telescope and its ESPRESSO instrument, a ground-based telescope in Chile's Atacama Desert, to observe the exoplanet and peer into its atmosphere. There, they detected iron.

The researchers believe that the dayside's blazing temperatures, which are hot enough to turn molecules into atoms and metal into vapor, create iron vapor.

Rapid winds carry this over to the nightside, where relatively cooler temperatures hover around 2,240 degrees Fahrenheit.

The iron vapor condenses into clouds, causing rains of liquid iron, and this creates the iron they observed in the atmosphere.

Specifically, the researchers noted an iron absorption line where the dayside transitions to the perpetual night-side of the planet -- but not where night turns to day.

"Surprisingly, however, we do not see the iron vapor in the morning," said Ehrenreich. "It is raining iron on the night side of this extreme exoplanet."

This makes it the first detection of chemical variations on an ultra-hot gas giant exoplanet, according to the researchers.

"The observations show that iron vapor is abundant in the atmosphere of the hot day side of WASP-76b," said María Rosa Zapatero Osorio, an astrophysicist at the Centre for Astrobiology in Madrid, Spain, and chair of the ESPRESSO science team. 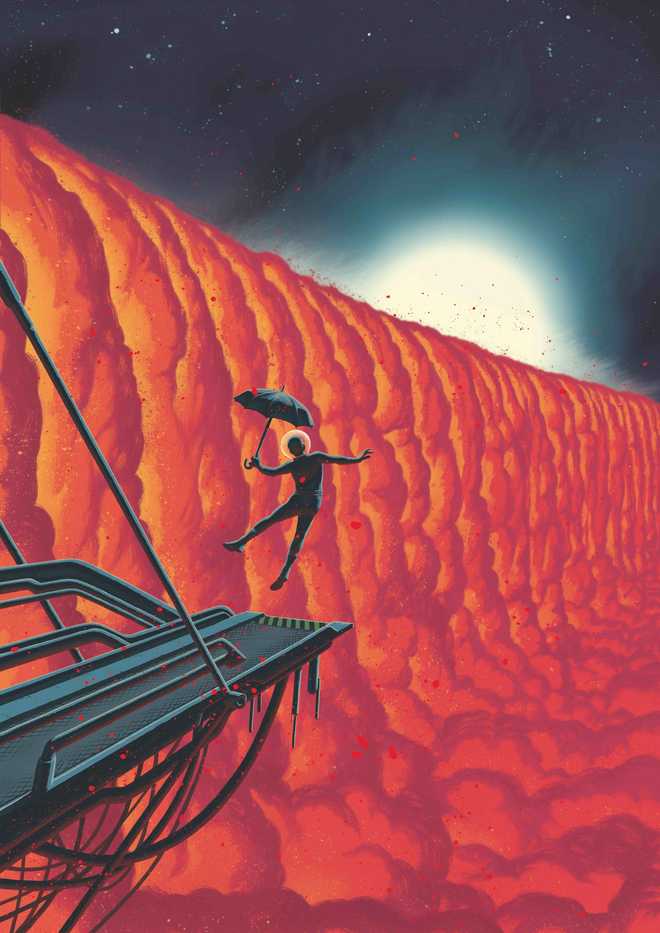 Frederik Peeters/ESO via CNN
This comic-book-style illustration by Swiss graphic novelist Frederik Peeters shows a close-up view of the evening border of the exoplanet WASP-76b.

"A fraction of this iron is injected into the night side owing to the planet's rotation and atmospheric winds. There, the iron encounters much cooler environments, condenses and rains down."

The detection was possible thanks to the ESPRESSO instrument, which stands for Echelle SPectrograph for Rocky Exoplanets and Stable Spectroscopic Observations.

Although ESPRESSO was intended to help find Earth-size planets around stars similar to our sun, it's also helping to find more unique and extreme exoplanets since it began observations in September 2018.

"We soon realized that the remarkable collecting power of the VLT and the extreme stability of ESPRESSO made it a prime machine to study exoplanet atmospheres," said Pedro Figueira, ESPRESSO instrument scientist at the observatory in Chile.

Understanding the chemistry of an exoplanet's atmosphere will help astronomers understand its weather, climate and environment.

"What we have now is a whole new way to trace the climate of the most extreme exoplanets," Ehrenreich said.

Ultra-hot gas giant exoplanets, "which have day-side temperatures commensurable with the surface of cool stars, are an emerging class of exoplanets," according to the study.

Previous examples of these extremely hot exoplanets include KELT-9b, WASP-121b and WASP-12b. And other types of unusual rain have been suggested on other planets, like HD 189733 b's wicked winds that send glass-like silicates raining sideways around the planet and even diamond rain on Neptune.

"Their high-temperature atmospheres are ideal laboratories for studying extreme planetary climates and chemistry," according to the researchers.