Archaeologists in Maryland discovered the historic homesite once owned by the father of Harriet Tubman, state officials announced Tuesday.

The former home of Tubman's father, Ben Ross, was discovered on property acquired in 2020 by the U.S. Fish and Wildlife Service as an addition to the Blackwater National Wildlife Refuge in Dorchester County.

"I am excited to announce our archaeologists have confirmed that this site was once the home of Ben Ross, and may have been where Harriet Tubman spent her early years," Lt. Gov. Boyd Rutherford said.

In November 2020, sister station WBAL-TV reported on how archaeologists were combing through clues, looking for Tubman's birthplace.

"A breakthrough occurred in March," Rutherford said. "Archaeologists uncovered evidence of a homesite and historic artifacts dating back to the early to mid 1800s."

"We looked at those artifacts closer and confirmed that these artifacts do date to the time period when he was living there," Schablitsky said. "With the artifacts, the archaeology, the evidence of a building, and just the location — knowing he worked in the timbered wetlands — those multiple lines of evidence told us unequivocally that this is the home of Ben Ross."

State officials said the property acquired by the USFWS contains 10 acres bequeathed to Ross by Anthony Thompson in the 1800s. As outlined in Thompson's will, Ross was to be freed five years after Thompson's death in 1836. Ross was freed from slavery and received the land in the early 1840s.

Tubman was born Araminta Ross in March 1822 on the Thompson Farm near Cambridge in Dorchester County. She and her mother were enslaved by the Brodess family and moved away from the farm when she was a toddler.

"The importance of discovering Ben Ross' cabin here is the connection to Harriet Tubman. She would've spent time here as a child, but also she would've come back and been living here with her father in her teenage years, working alongside him," Schablitsky said.

Ben Ross felled and sold timber, which was transported by free Black mariners to Baltimore shipyards and used to build ships. Tubman learned to navigate difficult terrain while working with her father. Interacting with mariners also provided knowledge of waterways on the East Coast, which may have helped her lead people to freedom via the Underground Railroad, state officials said.

"This was the opportunity she had to learn about how to navigate and survive in the wetlands and the woods. We believe this experience was able to benefit her when she began to move people to freedom," Schablitsky said.

Schablitsky kept in touch with family descendants, sending them photos of what they found as the search was underway.

"It means so much to the family to be able to see all of this, and that's why I want to thank the state of Maryland for having the vision and also to give the support to create this tourist center and also to keep funding things that relate to it and keep the story going and expanding because it's so important, not just for a family, but for the world to understand about our history, to know what happened," said Tina Wyatt, Tubman's great-great-great-grandniece and Ben Ross' great-great-great-great-granddaughter.

The archaeological discovery of Ben Ross' home site will be highlighted on the historic Thompson Farm where he and his family were enslaved. This new point of interest will be officially added to the Harriet Tubman Underground Railroad Byway, designated an All-American Road by the U.S. Department of Transportation Federal Highway Administration. The byway is a 125-mile, self-guided scenic drive that includes more than 30 sites related to Harriet Tubman's life and legacy.

“Today, I am excited to announce our archaeologists have confirmed that this site (searched in the Blackwater Wildlife Refuge) was once home to Ben Ross, and may have been where Harriet Tubman spent her early years.” ⁦@MarylandDNR⁩ ⁦@MDOTNews⁩ ⁦@USFWS⁩ pic.twitter.com/Q7P1OuTC1d 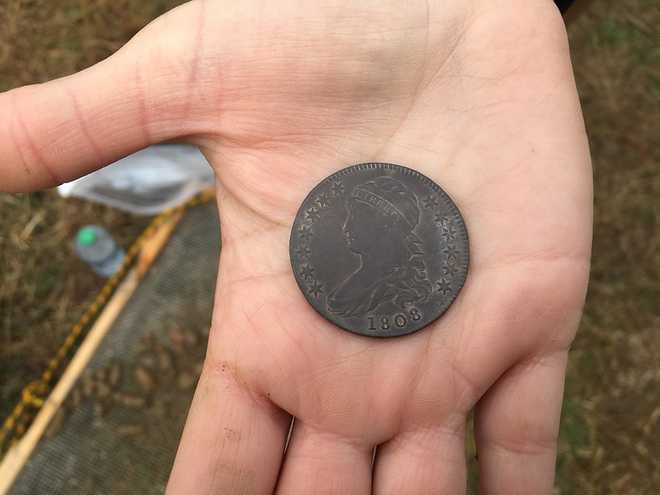 Maryland Department of Transportation
Coin found from 1808 that led to more discoveries.

In October 2020, WBAL reported on the team of archaeologists from the Maryland Department of Transportation and St. Mary's College who unearthed what they believe are slave quarters in Southern Maryland that are more than 300 years old.

In September 2020, WBAL reported on the tiny log cabin in Hagerstown that is at the center of a major archaeology dig. Historians and archaeologists figured out the cabin, which was slated for demolition, had major ties to the history of African Americans in Western Maryland.

In 2014, WBAL reported about the SHA's archaeological find in Anne Arundel County that provided a look at life 200 years ago.