Republican U.S. Sen. James Lankford would seem to have all the conservative credentials he'd need to coast to re-election in deep-red Oklahoma.

A devout Baptist, Lankford was the director of the nation’s largest Christian youth camp for more than a decade. He speaks out regularly against abortion and what he describes as excessive government spending. And his voting record in the Senate aligned with former President Donald Trump’s position nearly 90% of the time.

But like several other seemingly safe GOP incumbents, Lankford, who didn't even draw a primary opponent in 2016, finds himself under fierce attack by a challenger in his own party. The antagonist is a 29-year-old evangelical minister and political newcomer who managed to draw more than 2,000 people to a “Freedom Rally" headlined by Donald Trump's former National Security Advisor Michael Flynn, at which Lankford was accused of being not conservative enough.

“When James (Lankford) certified the big lie, he joined the big lie," Jackson Lahmeyer told the raucous crowd in Norman, citing Lankford's failure to endorse Trump's false claims about the election outcome. “The 2020 presidential election — that was a stolen election and we will never, ever allow it to happen again.” The state's GOP chairman, John Bennett, has already endorsed Lahmeyer in the race.

Infrastructure bill fails first Senate vote; lawmakers to give it another try

Similar scenes are playing out in other red states where ultra right-wing challengers are tapping into anger among Republicans over Trump's election loss and coronavirus-related lockdowns. Some incumbents suddenly are scrambling to defend their right flank, heating up their own rhetoric on social media and ripping into President Joe Biden at every opportunity.

In Texas, GOP Gov. Greg Abbott, who faces a contested reelection primary next year, is pushing looser gun laws than he ever previously embraced and proposing unprecedented state actions, including promises to build more walls on the Mexican border. 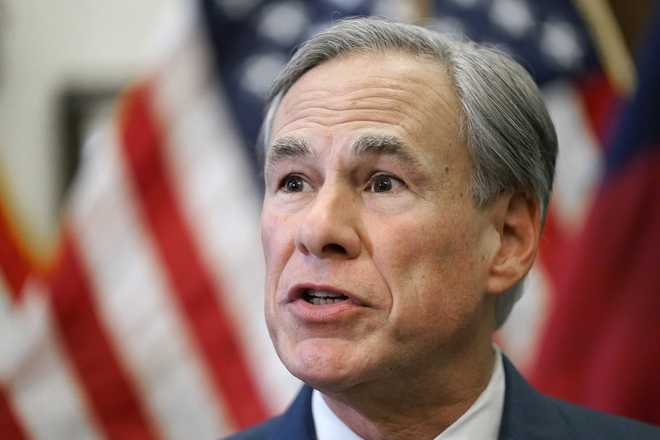 AP Photo/Eric Gay, File
Abbott, who faces a contested reelection primary next year, is pushing looser gun laws than he ever previously embraced and proposing unprecedented state actions, including promises to build more walls on the Mexican border.

“I think it’s unquestionably attributable to the aftermath of the 2020 election and the insurrection and former President Trump’s claims of voter fraud,” said Alan Abramowitz, a political science professor at Emory University in Atlanta.

Some conservative incumbents are obvious targets for right-wing challenges — notably U.S. Reps. Liz Cheney in Wyoming and Anthony Gonzalez in Ohio who voted to impeach Trump. Georgia Gov. Brian Kemp's offense was refusing to block Georgia's electoral votes from being awarded to Biden.

But with the 2022 election cycle approaching, the backlash is also touching even those who backed Trump consistently through countless controversies. Texas' Abbott echoed Trump's partisan positions and has banked $55 million in campaign funds, more than any sitting governor in history.

But he's drawn a challenge from Allen West, who until recently was the chairman of the Texas GOP. West, a tea party firebrand and former Florida congressman, has attacked Abbott's leadership after Democrats temporarily thwarted a GOP voting bill by decamping to Washington.

And he can draw a crowd. Last year, West led a boisterous rally outside the governor’s mansion to demand an end to coronavirus lockdown restrictions.

“We cannot sit around and continue to do nothing,” West told supporters in South Texas during one of his first campaign stops.

Actually winning a primary is probably more than many challengers, including West, can expect. But they can succeed in pushing the party farther to the right while also raising their own profiles as public figures.

Republican officeholders have faced challenges from the right in the past, but “Trump’s put a different name and spin to it" this time, said Pat McFerron, a Republican strategist and pollster in Oklahoma.

“As we become more self-selective with the media we consume, people find like-minded people in different social media channels and they think they’re in greater numbers than they are and feel they have an opportunity," he said.

In Arkansas, Republican U.S. Sen. John Boozman, a two-term incumbent, has drawn several GOP challengers, including the owner of a gun range that drew national attention for banning Muslims. Another is a former Arkansas Razorbacks football player whose campaign kickoff ad shows him firing an assault rifle and complaining that Democrats in Washington have been “taken over by radical socialists."

Boozman's opponents have criticized him for certifying the presidential election results. He may also draw fire because he is unusually mild-mannered for such a highly charged time. While he has historically focused on the state's agriculture industry and services for veterans, he now frequently mentions Trump in his campaign emails and even offered tickets to a Trump rally.

Republican officials in Idaho would usually be considered among the farthest right in the nation, but they, too, are under pressure. Anti-government activist Ammon Bundy has announced plans to challenge incumbent GOP Gov. Brad Little in 2022, and Bundy's People's Rights organization has been among those staging mask-burning rallies to protest coronavirus restrictions.

The anti-incumbent exposure can even be seen in lower state-level races in blue states. In one of Virginia’s most solidly red state House districts, an attorney who worked on the Trump campaign’s challenges defeated a seven-term incumbent in a June primary.

“I saw firsthand what happens when election integrity isn’t maintained,” challenger Wren Williams said in a campaign ad. Williams criticized Del. Charles Poindexter for failing to speak out against alleged voter fraud and defeated him by more than 25 points.

In Oklahoma, Lankford was jarred by the party chairman's endorsement of his opponent, which he said was an “unheard of" breach of traditional party neutrality.

In response, he’s quickly ramped up his criticism of Biden, hammering the president in particular on immigration.

“This is the problem,” Lankford said in a recent video from the Texas-Mexico border with immigrants being processed behind him. “This is the thing that Biden does not want you to see ... this is absolutely an open border situation.”

In the current political climate, it's hard for a Republican official to be safely conservative enough, said Abramowitz.

“You look at Sen. Lankford, there aren’t many Republican senators as conservative as him.”