The Village of North Palm Beach is warning golfers about an American crocodile believed to be living in the ponds of the Country Club's golf course.

The golf course is located on US-1 in North Palm Beach.

The Florida Fish and Wildlife Conservation Commission (FWC) said federal laws prohibit the removal of the crocodile, so people have to be aware that it is in the area.

The seven or eight-foot crocodile has been hanging out at the country club the last month, mostly sunbathing, showing off its teeth and feasting on fish in the ponds.

Golfers have been staying out of this seemingly-docile crocodile’s way, but also admiring the incredible sight.

"[It's the] first time I’ve ever seen a crocodile on a golf course," said Rich Pizzalotto, who's been golfing at the country club the last nine years.

This monster has been hanging out at the North Palm Beach Country Club the last month!

North Palm Beach Country Club head golf professional Allan Bowman said staff members warn golfers about the crocodile and to be extra cautious around ponds. There is also signage warning golfers that there is a crocodile in the area.

"It’s kind of fun, but it's kind of scary," Bowman said. "I’m not necessarily a fan. I wish he or she was not here. I wish they would just go away. It’s really a safety issue. We’re trying to take every safety precaution that we can."

Federal law prohibits touching crocodiles, so it can’t be moved. Though the FWC said conflicts between crocs and people are extremely rare, they ask people to keep their distance and never feed it. 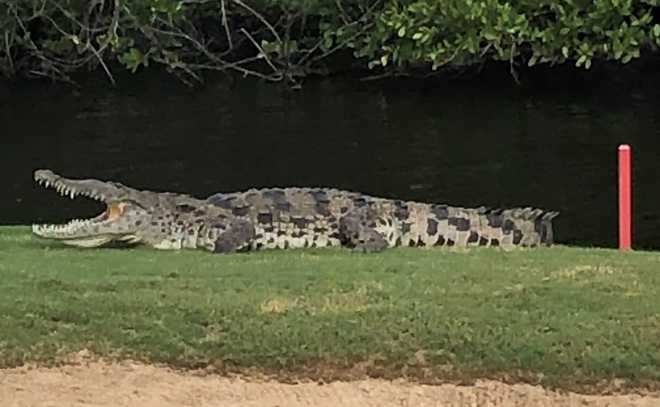 There are an estimated 2,000 American crocodiles in Florida, but they’re mostly in the Everglades.

For more information about living with crocodiles, click here to watch a video by the FWC.