By WFOR Staff via CNN

A father and daughter rode their antique high-wheel bikes, to the delight of drivers along the way, from Michigan to Key West, Florida.

The team of Randy and Amy Oleynik started their journey on Oct. 9 in Sault Ste. Marie, Michigan, at the northeastern end of Michigan’s Upper Peninsula, WFOR-TV reported.

They concluded their 2,000-mile ride on Saturday.

The pair celebrated the conclusion of their journey at the Key West marker by jubilantly lifting their 132-year-old bicycles as spectators cheered their achievement.

“It’s our second ride,” said Randy Oleynik, a 61-year-old pharmacist from Carleton, Michigan. “We rode from San Francisco to Boston in 2016, and after that we decided we should do the north-to-south to complete basically the ‘holy grail’ of high-wheel biking across the country.”

On their trek from Michigan to Key West, the father-daughter duo rode about 60 miles per day, accompanied by a support van driven by Randy’s wife and Amy’s mother.

“When people see us going by, number one they smile, so it’s a great reaction,” said Randy Oleynik. “They wave, they yell, they beep their horns, they swerve, they’ll stop their cars in the middle of the road.” 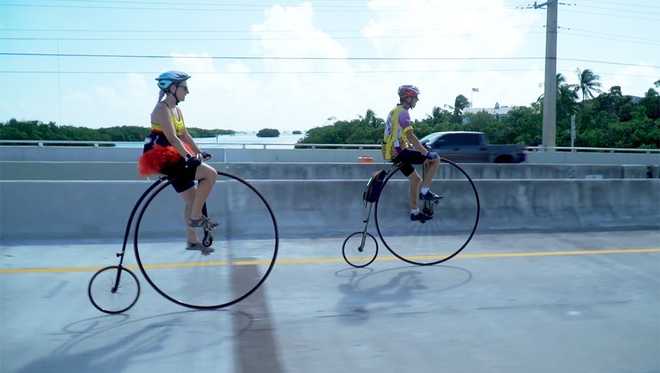 Amy said she hopes the ride will inspire others to seek out enjoyable moments and challenges.

“What we want this ride to tell people is, No. 1, get outside,” she advised. “Get out there — you’re definitely never too old to learn how to ride a bicycle.”