We are collaborating with FactCheck.org, a project of the Annenberg Public Policy Center of the University of Pennsylvania, in an effort to identify misinformation and to ensure news consumers get the facts. This story first appeared on FactCheck.org.

In the hours after President Donald Trump revealed that he and First Lady Melania Trump tested positive for the novel coronavirus, an image began circulating on Twitter that falsely suggested the Trump campaign had sent a fundraising email to supporters to capitalize on the news.

But the viral screenshot of the purported email was not, in fact, a message from the Trump campaign — and appears to have been created as a joke.

Not everyone interpreted it that way.

“[F]undraising off of his diagnosis turns my stomach. Could it be a #Covidhoax2020 ? Who knows,” one Twitter user’s post read, in part.

Another, from the president of the Georgia NAACP, called the supposed email “sinister and insulting.” (He later acknowledged that it was “not a legitimate email” from the campaign.)

The Trump campaign confirmed to FactCheck.org that the image did not show an actual email sent by the campaign. 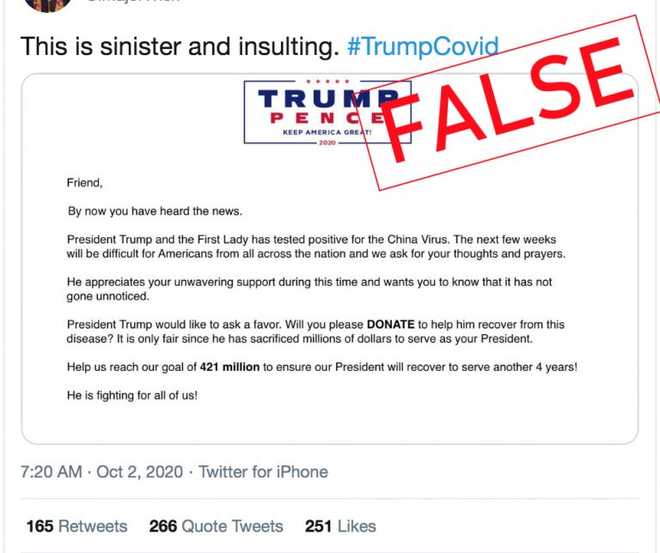 FactCheck.org
An image spreading on social media purports to show a Trump campaign email asking supporters to “please DONATE to help him recover from” COVID-19. It is not from the campaign, and appears to have been created as a joke.

The bogus email began, “Friend, By now you have heard the news. President Trump and the First Lady has tested positive for the China Virus.”

It later went on to say: “President Trump would like to ask a favor. Will you please DONATE to help him recover from this disease?”

In its fifth paragraph, the email suggested the push was to raise “421 million to ensure our President will recover to serve another 4 years!”

That $421 million is the same figure referenced in a New York Times investigation, which found that Trump “appears to be responsible for loans totaling $421 million, most of which is coming due within four years.”

Editor’s note: FactCheck.org is one of several organizations working with Facebook to debunk misinformation shared on social media. Our previous stories can be found here.

This fact check is available at IFCN’s 2020 US Elections FactChat #Chatbot on WhatsApp. Click here for more.

Trump, Donald (@realDonaldTrump). “Tonight, @FLOTUS and I tested positive for COVID-19. We will begin our quarantine and recovery process immediately. We will get through this TOGETHER!” Twitter. 2 Oct 2020.