Jay Patel had been the picture of living.

Keeping up with his two young, energetic kids.

Then, he started vaping. After three years of frequent e-cigarette use, Patel says his 38 year-old body suddenly reacted in ways it never had.

“I started feeling gravely ill,” Patel recalled during an interview inside his home near Atlanta. “I felt like I was almost dying inside." 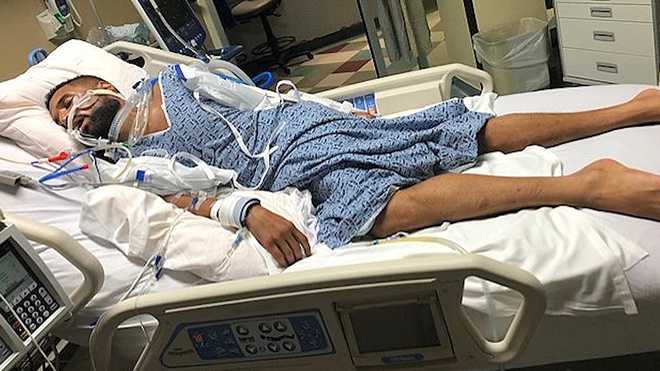 Courtesy Patel Family
Jay Patel on a ventilator at a hospital in July 2019.

Patel soon found himself in the hospital.

And lungs that “looked like broken glass," he said.

His wife, Monica, sat at his bedside.

“I just cannot believe this was happening to me,” Monica Patel remembered thinking, sitting next to her husband for an interview. “It was very scary time for us. And I was 35 and I thought: ‘Am I going to be a widow?’" 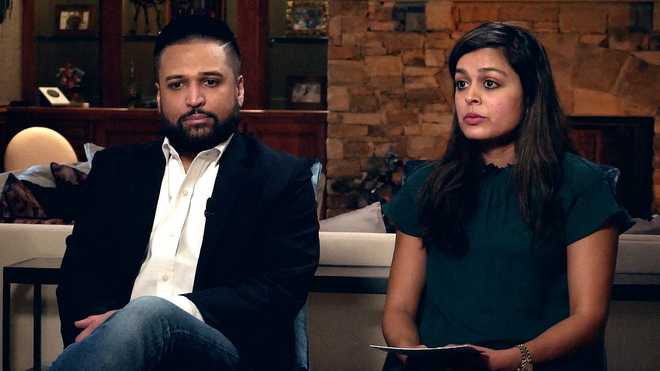 Patel and his attorney, Jake Plattenberger, provided the Hearst Television National Investigative Unit with his medical records and said his doctors diagnosed him with ‘E-cigarette, or Vaping, product use-Associated Lung Injury,’ known in the public health community by the acronym EVALI.

As of Feb. 18, 2020, the date of the most current figures available, the Centers for Disease Control and Prevention said more than 2,800 people in all 50 states had been hospitalized from the condition, and at least 68 have died, including six in Patel’s home state of Georgia.

Patel, believed to have been one of the first vaping injury cases in the state, says he knew virtually nothing about the potential consequences of using e-cigarette products.
“I didn't think one could get this sick from vaping,” Patel said.

Patel is now suing JUUL labs, the company he said that made his vaping products, in state court, one of several lung injury-related cases across the country. JUUL has made a motion to remove Patel’s case permanently to U.S. District Court in the Northern District of Georgia, so it has not yet been required to file its response to the complaint. 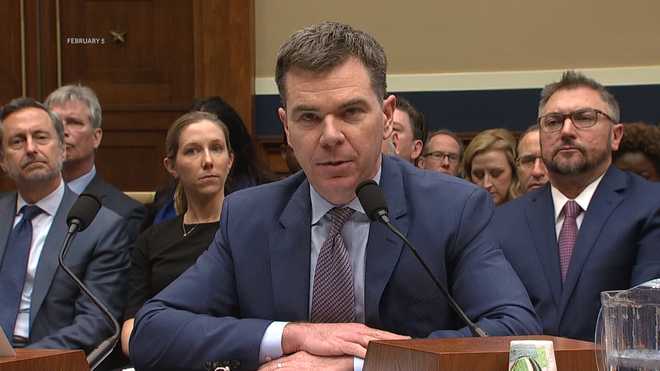 The company, which owns the dominant position in its sector in America, declined to make its CEO available for an interview. In a recent release on its website, JUUL says it has submitted 110 studies to the FDA evaluating its product's impacts on public health.

Patel's attorney, Jake Plattenberger, fears what the long-term effects will be for many.

“These products in particular were put on the market without any kind of oversight,” Plattenberger said in an interview. “People that currently have some, you know, kind of low-level lung disease, they're going to continue to get worse,” he predicted.

“There can be dozens and dozens of chemicals in a flavoring… We need a lot more detail and a lot more information on exactly what is in this stuff.”

Wednesday is the long-awaited, pandemic-delayed deadline for makers of e-cigarette products to tell the FDA why they're not harmful to a person’s health, and to describe what manufacturers are doing to prevent kids and teenagers from using them. Any company that does not submit its plans for pre-market review faces banishment of its products from the lightly regulated e-cigarette marketplace, according to the FDA.

To determine whether the labels of some vaping products from manufacturers other than JUUL were accurate, and how pervasive a lack of transparency may be in the industry, the National Investigative Unit purchased 10 items from stores across the country and paid 374 Labs in Sparks, Nevada, to test them for CBD, a legal chemical from the hemp plant, and THC, the mind-altering compound found in the cannabis plant. 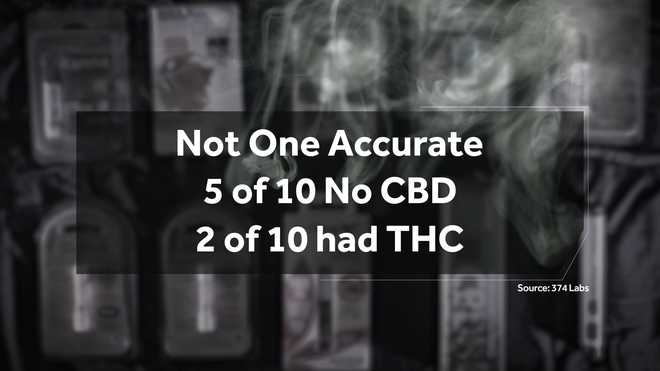 Of the 10, not one had ingredients on the label that fell within the 10% variance the lab generally uses, the results showed. Half were found to have no CBD at all, even though all of those five products claimed to have some amount – one as much as 1000 mg. Two of the 10 items tested contained THC without disclosing it on the packaging – one of which was twice the limit allowed by law. The presence of THC in a person’s body could lead to failed drug tests or disqualified sports results and can be illegal to travel with in some areas. Due to the presence of undisclosed THC, the reporting team on this story destroyed the two THC-positive products before traveling outside of Nevada.

Jeff Angermann is the director of the lab, which he says has tested more than 30,000 samples prior to the ones from Hearst Television. Based on the results from the 10 products sampled for this story, Angermann concluded “you cannot trust the label,” he said during an interview at the lab, adding that it is “absolutely” buyer beware for vaping consumers.

Contacted for this story, Sarah McLaughlin and Kirsten Wedegartner at Heritage Hemp CBD, the Massachusetts company that manufactured one of the two products purchased by the NIU that came back positive for THC, said it was now changing the label to include the disclosure that the product “Contains trace amounts of THC, less than 0.3% which is the federally allowable limit.” Its vape pen, purchased by Hearst and tested by 374 Labs, was found to contain 0.3% of THC.

Another lab, California-based InfiniteCal, says it found nearly two-thirds of the vape cartridges it tested in its own sample study within the past year were positive for a range of pesticides. The lab’s sales director, Branden Kenton, said in an interview at the CBD Expo in Las Vegas in February that he was not surprised by the presence of pesticides.

“No, we've been seeing this trend for a couple of months,” Kenton said.

The Expo, the largest of its kind in the United States, is also a favorite of vaping manufacturers, distributors, and marketers. Of all the attributes they’re hawking, transparency is not always among them. 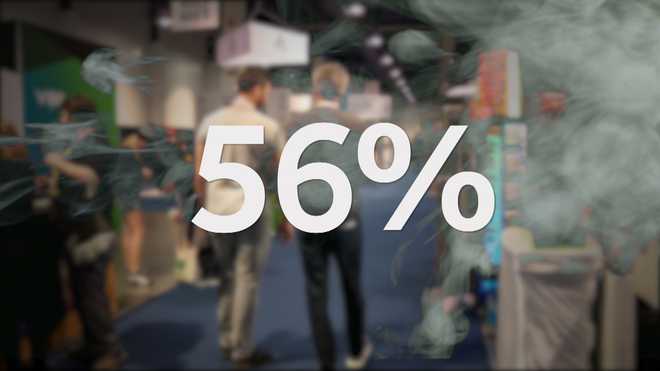 At the time of the convention, the National Investigative Unit found 56% of the companies listed as having a booth at the Expo that sold vaping products did not have a "certificate of analysis" (COA) on their website, meaning consumers would have no independent way to know what's actually in the products.

That includes some products at a company called The Remedy, based in Connecticut.

Approached by a reporting team from the NIU, a sales representative at The Remedy’s booth acknowledged that the public “cannot” obtain a COA from the company before purchasing some of its products. When asked if the consumers should take the company’s word the label is accurate, the representative responded, “yes,” adding, “if you see that as problematic, you can take your business elsewhere.”

The man then placed his hand on the correspondent’s microphone and shoved it away.

When asked not to touch the recording equipment, the sales rep responded with a vulgarity.

“All right, then please get the **** out of my face,” he said, with two video cameras recording the encounter.

The company's marketing director, Don Willis, later apologized via email, writing: "Such a reaction is not the way our company has or will conduct itself in the future."

Representatives of another company, North Carolina-based United Natural Hemp Extracts, also declined at the time to post some of its COAs on its website or give them to reporters at the Expo. Sales representative Christian Clifton, when asked if a customer would have to buy the item or come to a convention like the Expo in order to find out what’s inside the product, responded, “essentially, yes.” 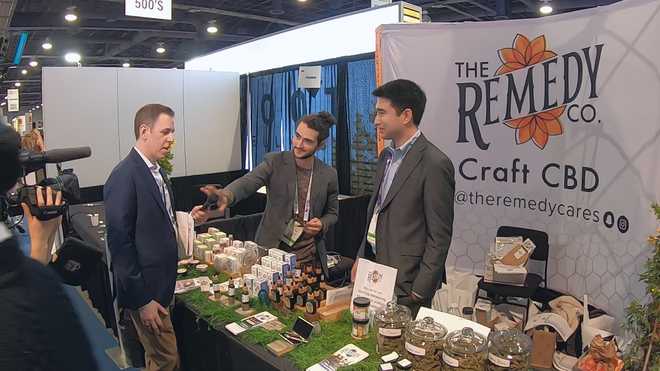 Courtesy Hearst TV
A sales representative at The Remedy shoves the microphone held by Chief National Investigative Correspondent Mark Albert at the CBD Expo in Las Vegas on Feb. 15, 2020.

About 20 minutes after the exchange, UNHE’s vice president of sales, Tim McCarthy, chased down the reporting team elsewhere on the convention floor to say the central reason for keeping the COAs from the public was his worry about counterfeiters.

“I wouldn't want someone taking that, Photoshopping it, and putting it out on their own, as their own,” McCarthy said.

A COA can cost less than $200 to produce from a reputable laboratory.

‘It would be a deterrent’

Jay Patel, the former e-cigarette user in Georgia whose hospitalization and lingering health effects convinced him to give up vaping altogether, sees a different motivation for the lack of transparency or accurate labels at some vaping companies. 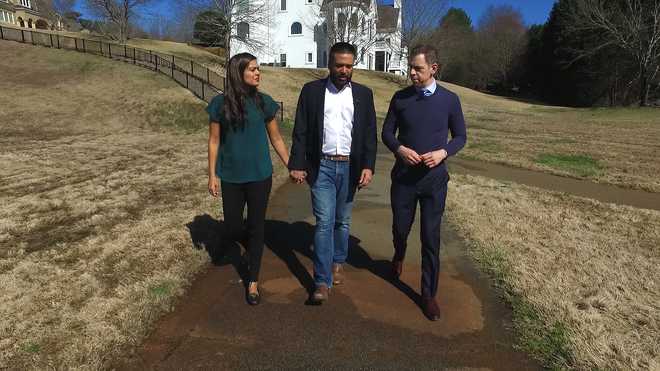 "If those consumers were more educated on what was actually in the product, that it would be a deterrent” to using them, Patel said while walking hand-in-hand with his wife in a park near his Atlanta-area home.

“It disgusts me, not only just seeing it and the smell,” he added, “but what can happen to them. And it's only a matter of time."

PART 3: Coming Thursday, the National Investigative Unit shows viewers, listeners, and readers what some schools are doing to try to prevent vaping use by kids and how vaping detectors work.

Mark Albert is the chief national investigative correspondent for the Hearst Television National Investigative Unit, based in Washington D.C. April Chunko, Travis Sherwin, and Hyojung Kim contributed to this report.

Know of e-cigarette injuries? Have a confidential tip or inside information about the vaping industry? Send information and documents to the National Investigative Unit at investigate@hearst.com.