As thousands of supporters of President Donald Trump stormed the U.S. Capitol on Wednesday, federal agents were working at the same time to detonate two pipe bombs found just blocks away at the offices of the Republican and Democratic national committees.

The focus on the insurrection shifted public attention away from the explosives threat — which experts say remains a primary concern for law enforcement ahead of next week’s inauguration of President-elect Joe Biden. Investigators are increasingly worried about the potential for attacks on soft targets in the nation’s capital.

The threat is substantial in Washington, where many government buildings, including the U.S. Capitol, are usually open to the public and thousands of tourists wander through massive museums and some of the most iconic monuments in the country at all hours of the day and night and can even get close to the White House.

Related Story
'They were left naked': Capitol police were overrun with little defense against rioters

It was around 12:45 p.m. Wednesday when U.S. Capitol Police and agents from the FBI and the Bureau of Alcohol, Tobacco, Firearms and Explosives were called to the Republican National Committee’s office after a pipe bomb was found outside. About 30 minutes later, as the agents and bomb technicians were still investigating at the RNC, another call came in for a second, similar explosive device found at the Democratic National Committee headquarters nearby. 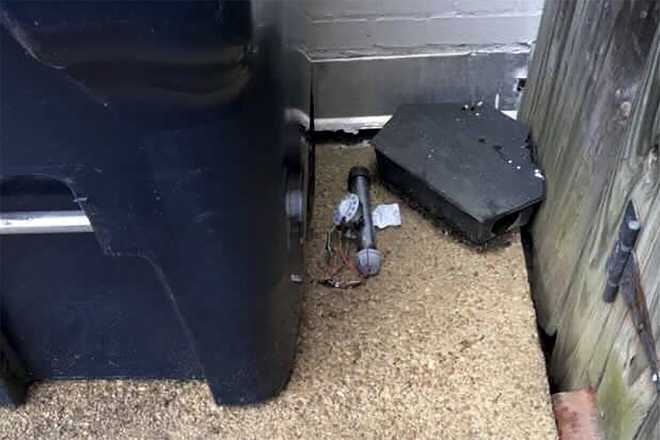 AP Photo
An explosive device is shown outside of the Republican National Committee office, Wednesday, Jan. 6, 2021 in Washington.

The two explosive devices were very similar, and both were about a foot long with end caps and wiring that appeared to be attached to a timer, according to two law enforcement officials familiar with the matter. Investigators are still examining the devices and their components to determine the specific compounds inside the pipe bombs, but they both appeared to contain an unknown powder and some metal, the officials said.

The officials could not discuss an ongoing investigation publicly and spoke to The Associated Press on condition of anonymity.

Investigators so far have few clues to go on — and the chaos from the riot at the Capitol didn’t make their job any easier. They’ve released only a grainy image of a potential suspect from a surveillance camera. The image shows the person in a gray sweatshirt with a hood pulled over their head and a face mask, black pants and black gloves carrying a bag or suitcase.

The #FBI released new photos of the individual(s) responsible for placing suspected pipe bombs in Washington, D.C., on January 6. If you recognize this backpack or these shoes, submit a tip at https://t.co/buMd8vYXzH. A $50,000 reward is available. @FBIWFO https://t.co/Quaky7ud2X pic.twitter.com/ivJJwoWERr

Separately, while responding to calls about suspicious packages Wednesday, U.S. Capitol Police officers also discovered a suspicious red pickup truck with Alabama license plates near the Capitol, noticing the handle of a firearm on the right passenger seat, officials said. Officers ran the truck’s plates and called in the Bomb Squad to investigate. When they searched the vehicle, they found an M4 Carbine rifle, loaded magazines and 11 Molotov cocktails made out of Mason jars and rags. Prosecutors described the items as something like “homemade napalm bombs” and arrested the truck's owner, Lonnie Coffman of Falkville, Alabama. But they said Coffman is not suspected of leaving the bombs at the Republican and Democratic national committees.

With more protests planned and Biden’s inauguration a little more than a week away, security experts and law enforcement officials are concerned about the potential for additional bomb threats or attacks on so-called soft targets in Washington, like museums and government buildings that don’t have full security infrastructure like the White House does.

“It’s not unusual that this is a prime target,” said Joseph Young, a professor of political violence, terrorism and homeland security at American University. “If the target is really about the seat of power, then D.C. is more effective.”

“There are obviously other spots in D.C. that are high value because they bring such attention to whatever your issue or your cause is,” he said. “That’s the same reason people come to protest in D.C.”