The Canadian Forces Snowbirds that flew over British Columbia — part of a weeks-long operation aimed at uplifting Canadians' spirits and honoring those affected by coronavirus — ended in tragedy Sunday when at least one person was killed.

The operation, dubbed Operation INSPIRATION, pays tribute to both victims of the virus and those who are battling it on the front lines.

The Snowbirds, much like the U.S. Navy's Blue Angels, often perform air shows for the public. But Sunday's demonstration came to a tragic end after a Snowbirds aircraft crashed in Kamloops.

A Kamloops resident told CTV network she decided to go outside to watch the aircraft right before the crash.

"Just as I'm walking outside we hear this huge 'boom' and we come out and we just look down the street and there's just this big, huge thing of flames and smoke," the resident said. "It was quite emotional, quite scary. I was shaking."

Capt. Jennifer Casey, who was identified as the one deceased victim, was the team's public affairs officer, the National Defence Canadian Armed Forces said in a news release. 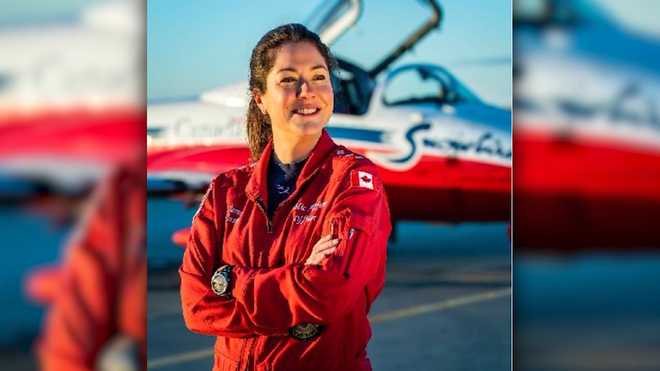 Casey, who was from Halifax, Nova Scotia, joined the Canadian Armed Forces in 2014, according to her biography on the Royal Canadian Air Force website. She had spent years before that working as a reporter, anchor and producer for broadcast radio.

She joined the Snowbirds in November 2018, her biography says.

Capt. Richard MacDougall, the pilot of the aircraft, was injured in the crash and is being treated for his injuries, the Canadian Armed Forces said.

In a statement, the Snowbirds said the injuries were not life-threatening.

Authorities have kicked off an investigation into what may have caused the crash. The military indicated they are also sending an investigation team to Kamloops, the city's mayor, Ken Christian, said.

In the meantime, he said the Snowbirds were grounded in Kamloops.

The cross-country tour began on May 2, according to a statement posted on the team's website late April.

"Through Operation INSPIRATION, we not only want to salute the front-line health-care workers, first responders, and essential workers, but also all Canadians doing their part to stop the spread of COVID-19. We want Canadians to know we're in this with you," Lieutenant-Colonel Mike French, the Commanding Officer of the Canadian Forces Snowbirds had said in a statement.

Authorities encouraged Canadians to watch the flyovers from their homes and added that the aircraft would fly at an elevation "no lower than 500 feet above all obstacles."

In a statement following the crash, Prime Minister Justin Trudeau said he was deeply saddened by the loss.

"For the past two weeks, the Snowbirds have been flying across the country to lift up Canadians during these difficult times. Every day, they represent the very best of Canada and demonstrate excellence through incredible skill and dedication. Their flyovers across the country put a smile on the faces of Canadians everywhere and make us proud," he said.

"Our thoughts are with the families of Captain Casey and Captain MacDougall, as well as the entire Canadian Forces Snowbirds team, as they grieve this terrible loss," the prime minister added.