A near-Earth asteroid may be a fragment that once broke away from the moon.

Named Kamo'oalewa, which derives from a Hawaiian creation chant that alludes to an offspring traveling on its own, the quasi-satellite was first discovered in 2016 by astronomers using the Pan-STARRS telescope in Hawaii. Pan-STARRS is short for Panoramic Survey Telescope and Rapid Response System.

A quasi-satellite is a type of near-Earth asteroid that orbits the sun but sticks close to Earth.

Astronomers don't know much about this type of asteroid because they are typically very difficult to observe. In the case of Kamo`oalewa, scientists have only been able to observe it for a few weeks each April since its discovery. Kamo`oalewa is about 4 million times fainter than the faintest star we can observe with the naked eye in the night sky.

Measuring between 150 and 190 feet in diameter, the asteroid is about the size of a Ferris wheel. During orbit, it comes within 9 million miles of Earth. This sounds like a large asteroid, but it's small when compared to other rocky remnants that can reach the size of the Empire State Building or greater.

Only Earth's largest ground-based telescopes can spot the asteroid, so astronomers used the Large Binocular Telescope on Mount Graham in southern Arizona for their observations. They determined that Kamo'oalewa's spectrum, or reflected light pattern, matches lunar surface minerals and lunar rocks collected during NASA's Apollo missions.

This suggests that Kamo'oalewa was once part of the moon and broke away to form an asteroid. Astronomers aren't sure when this impact event occurred because there are currently no other known lunar-created asteroids.

The asteroid is the likely result of debris from an ancient impact event, or it was formed from the gravitational breakup of a larger body during a close encounter with the Earth and moon, the researchers believe. 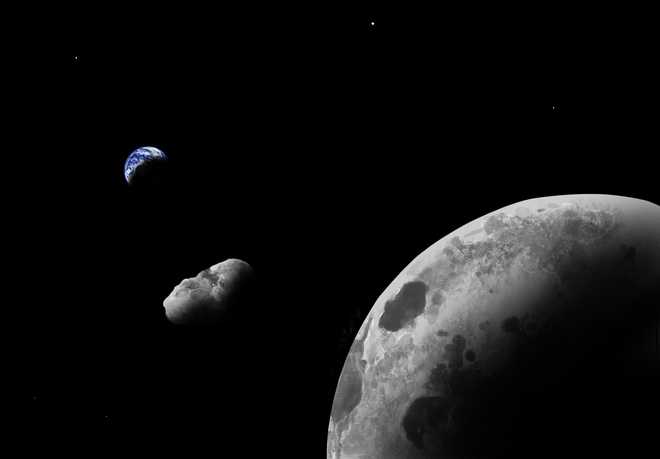 Addy Graham/University of Arizona
An artist’s impression of quasi-satellite Kamo’oalewa near Earth and the moon is shown.

The study was published Thursday in the journal Communications Earth & Environment.

"I looked through every near-Earth asteroid spectrum we had access to, and nothing matched," said lead study author Ben Sharkey, a doctoral student at The University of Arizona's department of planetary sciences, in a statement.

Sharkey and his adviser, Vishnu Reddy, a University of Arizona associate professor of planetary sciences, debated the origins of the asteroid and continued observations to determine other possibilities.

"We doubted ourselves to death," said Reddy, a coauthor on the study, in a statement.

While the telescope was shut down in April 2020 due to the pandemic, this year afforded another opportunity.

"This spring, we got much needed follow-up observations and went, 'Wow it is real,'" Sharkey said. "It's easier to explain with the moon than other ideas."

The asteroid's orbit, which makes it so difficult to see, also hints that it originated from the moon. While Kamo`oalewa orbits the sun in a manner similar to the way that Earth does, it has a slight tilt unlike other near-Earth asteroids, said study coauthor Renu Malhotra, a Louise Foucar Marshall Science Research Professor and Regents Professor of Planetary Sciences at The University of Arizona.

"It is very unlikely that a garden-variety near-Earth asteroid would spontaneously move into a quasi-satellite orbit like Kamo`oalewa's," Malhotra said in a statement. "It will not remain in this particular orbit for very long, only about 300 years in the future, and we estimate that it arrived in this orbit about 500 years ago."