Outside of the coronavirus pandemic, there was plenty of news making headlines this week.

Here's a glimpse at what you may have missed:

An invasive South American lizard — known as tegus — was recently spotted in Georgia for the third year in a row, and officials there are advising people to report sightings of the lizard and kill them if they are able to do so “safely and humanely.”

Related Story
An invasive lizard species has been spotted in Georgia. Residents are being asked to report and kill it

A black bear was able to break into a rental cabin in Gatlinburg, Tennessee, and got away with some junk food, beers, sodas and some allergy medication.

Forecasters say there's a 70% chance the first named tropical system will form off the southeastern U.S. coast this weekend, which would mark the sixth consecutive year with a storm forming before June 1, the official start of hurricane season.

Related Story
Arthur, the first named storm of the hurricane season, could form this weekend

Mike Tyson hints at return to the ring

In a pair of training videos posted on his Instagram page, former heavyweight boxing champion Mike Tyson, 53, declared, "I'm back."

An autopsy report unveiled this week that Ahmaud Arbery was killed by three shotgun blasts in southeast Georgia. The men accused of shooting the unarmed 25-year-old in February have been charged with murder, while a man who caught the shooting on camera has been receiving threats, according to his attorney.

The brother of the pilot in the January helicopter crash that killed all nine people aboard including NBA legend Kobe Bryant says the passengers were negligent, according to recently filed court papers.

Police are trying to find New York Giants cornerback DeAndre Baker and Seattle Seahawks cornerback Quinton Dunbar after multiple witnesses accused them of an armed robbery at a party in Florida.

The family of a Kentucky woman working as an EMT, who was killed in March after officers forced their way inside her home and exchanged shots with her boyfriend, has filed a lawsuit seeking a thorough investigation of the raid.

Related Story
An EMT was shot and killed during a police raid of her home. The family is suing for wrongful death

NASCAR driver says he has no recollection of Daytona 500 crash

NASCAR driver Ryan Newman says he has no memory of his horrific crash in the Daytona 500 in February, nor does he remember his hospital stay until he was leaving with his kids. The 42-year-old spoke about the crash during a news conference this week and was recently cleared by NASCAR to return to racing.

Authorities in western Nevada checked for possible highway damage following a magnitude 6.5 earthquake in a remote area early Friday. The quake occurred in a remote area of the state between Reno and Las Vegas, and people from Salt Lake City, Utah, to California’s Central Valley tweeted that they felt it. 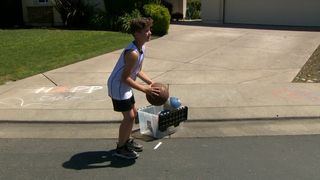