The Akron Zoo landed a rare find recently, adopting a blue lobster from a nearby Red Lobster after restaurant employees recognized the rarity of the blue shell.

The partnership between the Akron Zoo and Red Lobster came from a conservation partnership called Seafood Watch, zoo officials said. The program is run by the Monterey Bay Aquarium to help consumers and businesses choose seafood that is farmed sustainably and fished in ways to support a healthy ocean.

After Red Lobster employees discovered the blue lobster, named Clawde by the restaurant chain after their mascot, they contacted the Monterey Bay Aquarium, who then reached out to the zoo. The zoo's animal care staff was able to quickly spring into action and prepare a new home for him, officials said.

Blue lobsters are very rare, occurring one in every 2 million, zoo officials said. The blue coloration of the shell is the result of a genetic anomaly. 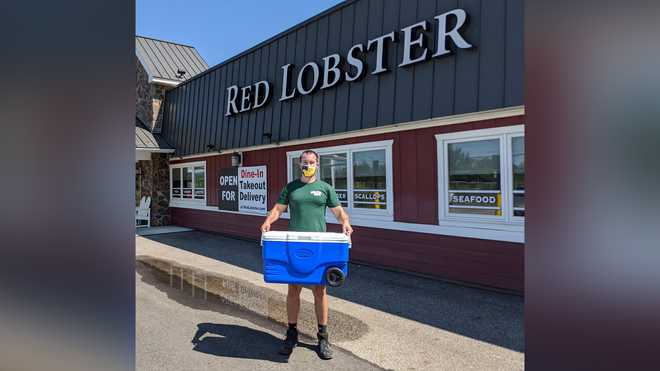 Akron Zoo/Facebook
An Akron Zoo staff member picks up the lobster from the Red Lobster restaurant.

Zoo officials said Clawde is acclimating to his new home at the Akron Zoo, in a special tank that has been dubbed “Clawde’s Man Cave” by his care team. Clawde now resides in the Komodo Kingdom building, which is currently closed to guests due to the COVID-19 pandemic.