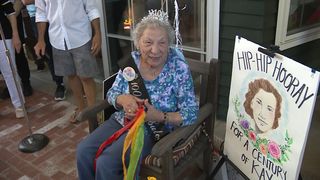 A boy who was staying with his grandmother at a public housing for the elderly in Massachusetts died Sunday after falling from the ninth floor of the building, according to officials.

"It was a tragedy. Yes, it was," said resident Barbara Leslie.

Investigators say a 9-year-old boy with autism somehow slipped out of this window of his grandmother's ninth-floor apartment, falling onto a concrete walkway at around 9:30 a.m. at Belair Tower in Brockton.

"I was sitting on the porch, and I heard a loud bang, and when I came to see what it was – the loud bang – then I found, saw the young man lying there," said witness Curlie Beauliere.

"I was out on the balcony, and I had seen the firefighters and the paramedics coming up, and – to get him up off the ground," Leslie said.

The boy was rushed to Good Samaritan Hospital, where he was pronounced dead. Police were investigating the case from the ground and up on the ninth-floor, looking for any clues about how the boy got out of the window.

"He was very, very pleasant. Very sweet," said Nair Fontes, a friend of the boy’s mother.

The incident is under investigation, but foul play is not suspected, according to the District Attorney's Office.

A friend of the boy's mother is asking the public not to just assume this tragedy was caused by neglect.