A group of young Black men executed after being convicted by all-white juries of allegedly raping a white woman has been pardoned in Virginia 70 years after their deaths.

"While these pardons do not address the guilt of the seven, they serve as recognition from the Commonwealth that these men were tried without adequate due process and received a racially biased death sentence not similarly applied to white defendants," Northam's office said Tuesday.

Video above: What happens when the criminal justice system gets it wrong?

"We all deserve a criminal justice system that is fair, equal, and gets it right — no matter who you are or what you look like. I'm grateful to the advocates and families of the Martinsville Seven for their dedication and perseverance," he added.

Family members of the seven men said their relatives were interrogated under duress, without the presence of a lawyer, and their confessions were coerced under the threat of mob violence.

The "Martinsville Seven" were convicted of raping 32-year-old Ruby Stroud Floyd, who had gone to a predominantly Black neighborhood in Martinsville, Virginia, on Jan. 8, 1949, to collect money for clothes she had sold.

Four of the men were executed in Virginia's electric chair on Feb. 2, 1951. Three days later, the remaining three were also electrocuted. At the time, rape was a capital offense. 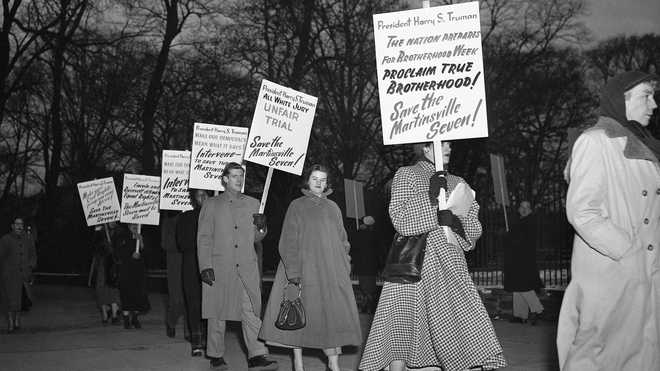 Henry Burroughs
In this Jan. 30, 1951 photo, as temperatures drop below freezing, demonstrators march in front of the White House in Washington, in what they said was an effort to persuade President Harry Truman to halt the execution of seven Black men sentenced to death in Virginia on charges of raping a white woman. (AP Photo/Henry Burroughs, File)

Since last year, the Martinville 7 Coalition, including family members and community advocates, have been pushing for the posthumous pardon.

"They did not deserve to die. Governor Northam should render an apology to the families of these seven men, stating that they should not have been executed," James Grayson, son of Francis DeSales Grayson, said. "It's never too late to right a wrong."

During the ceremony, relatives described the devastation of hasty trials and the brutal legacy of the electric chair. 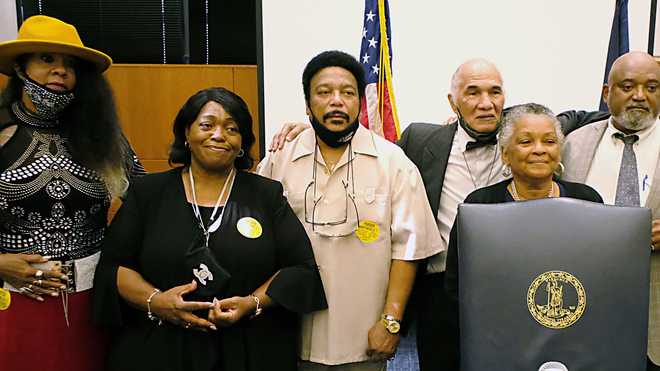 "I was traumatized by this incident," said Curtis Millner, who was 9 when his cousin Booker T. Millner was executed. "I'm looking for closure."

Prior to abolishing the death penalty earlier this year, Virginia had executed more people than any other state — and studies have shown that a defendant is more than three times as likely to be sentenced to death if the victim of a crime is white than if the victim is Black. From 1908 to 1951, all 45 prisoners executed for rape in Virginia were Black men. In 1977, the Supreme Court ruled that imposing the death penalty for rape was cruel and unusual punishment.

"While we can't change the past, I hope today's action brings them some small measure of peace," Northam said.

These latest pardons mark the Virginia governor's 604th pardon since his time in office.